When glazing is assessed with regard to energy saving, the determinant is to define the way in which heat losses emerge through a insulating glass units.

The biggest amount of heat leaving a room first reaches the surface of the glass of the internal insulating glass unit and becomes absorbed by it. Due to heat permeability, the absorbed heat reaches the surface of the internal glass which is next to the space between glass units (layers). Heat is transmitted further on in different ways from there (see Fig.). 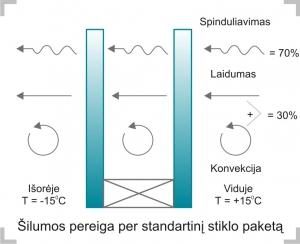 Heat transmittance in the insulating glass unit with ordinary glass units (without films) is executed due to radiation of heat (≈70%) and due to heat permeability and convection (jointly ≈ 30%).

Selective films decrease heat losses because of radiation, while such inert gasses as argon, krypton, etc. make impact on heat losses due to permeability and convection. 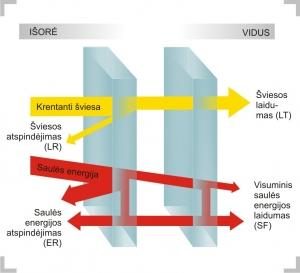 Solar radiation and radiation of the long waves emitted by the heating devices in a room cover different lengths of the waves of electromagnetic spectrum. Only about a half of the solar spectrum falls to the visual area. Spectrum-selective insulating glass units reflect or absorb the solar infrared rays, but they transmit the visual light in this way reducing the costs of room conditioning. When reflecting the long infrared waves, selective insulating glass units reduce transmittance of heat due to the difference in the indoor and outdoor temperatures. 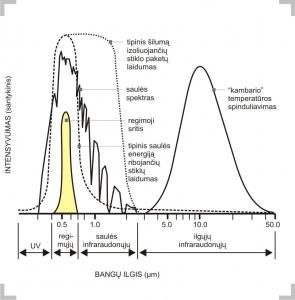